This has been a busy year and I am glad it is now behind me. I’d like to write a bit about the past year and what I want to write about in the new year. This last semester has been very taxing for me. I was pulling twelve-hour shifts, five and sometimes six days a week. I’ve been focusing on taking steps to adequately support my family. Everything else took a backseat to that goal. Now that matters have slowed down a bit for the next six to nine months I have time to read, study and write.

I have given the blog a new theme. I have been unhappy with the format for some time as it presents text in a far too narrow format. I’d like a wider layout to maximize reading space. This particular theme is not necessarily where the blog will end up. It is just what I have chosen for now. I may change it again later.

I chronicled the Hankadox fiasco over the course of the year. I tried to give readers as much of the backstory as I was able. The Hankamess unfortunately continues but I have pretty much said what I needed to say. I really don’t keep track of what is going on anymore and I don’t plan to focus on it unless something new or significant comes along. (I expect something worth writing about sometime in March or April of 2019.) I may compose a concluding post with my summary thoughts on the matter as well.

The Hart of Origen

I’ll be spending time analyzing arguments for Universalism and examining the historical sources concerning Origen and his condemnation. There has been a lot of hay being made by Hart and others on these topics and they have in my estimation made quite a mess in Orthodox circles in particular. I plan to help rectify that situation.

I plan on writing more on the teaching of Monothelitism and Apollinarianism from Biola faculty. I started down that path when I wrote about William Lane Craig’s open advocation of those two heresies, but he is not alone among Biola faculty or among evangelical apologists who teach it. Readers can expect a number of posts focusing on a more exegetical case for Dyothelitism as well as examinations of what the above-named heterodox advocates have written. For my part this is a major issue which has been buried in the apologetic community and deserves far more attention. After all, if Christology doesn’t matter, what else does?

This is another topic which will cover a number of posts. Here I will largely be following the thought of Felix Cirlot who decidedly won me over to the view many years ago. There are a number of objections to Episcopacy and Apostolic Succession among Protestants and I think it would be worthwhile to provide well thought out answers to them. For many years I have owned about half a book case of works on the subject and I have written very little on the topic. I plan to remedy that in the coming year.

On Romulans and Reformations

There is an old Romulan proverb (for those Trekkies out there) that states that when the enemy of your enemy is your friend, make sure to strike both of them. During the last year

I was asked to write an article for Modern Reformation concerning Hanegraaff and Orthodoxy. I gladly did so for a variety of reasons. I suspected, but did not know that the entire print issue would be aimed at Orthodoxy. I plan to take aim at what some of the other writers in that issue had to say.

Recently there are some new critics from the Protestant side of icons and iconic veneration. Initially these critics weren’t too serious but after interacting with some Orthodox apologists other than myself they have become more sophisticated. I believe they now warrant a detailed response. A number of posts will evaluate their arguments.

A long time ago in a galaxy far, far away, a cabal of Calvinists wrote a lengthy piece aimed at answering my criticisms of Reformed Christology. I did not have the time or the

funds to provide a detailed answer. I didn’t and don’t believe that they answered the criticism but since it remains in the blogsphere and the most substantial attempt to refute it, I aim to provide an exhaustive response to it.

I have been involved to various degrees with the Pro-Life movement for a long time. Two items though warrant writing on this topic. The first is the drift away from political party loyalty towards supporting Pro-Choice candidates in an attempt to lessen abortion by addressing its motivating factors. I don’t believe this is what it is cracked up to be. And the second is like unto it, namely why abortion is legal in the first place. Many explanations have been offered but none of them get to the heart of the matter.

The Pit of Despair

Next we come to the on-line publication, Public Orthodoxy which styles itself the voice of 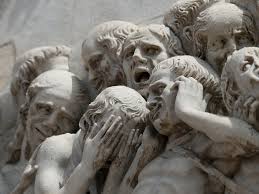 Orthodoxy for intellectuals. I’ve watched intellectual bile vomit forth from this site for some time, long before the recent debacle with Bp. Ware and company. I believe it is time that I enter the fray and use what talents and education God saw fit to give me to provide the appropriate ass whooping.  It has been a long time coming and God knows they done need it.

Earlier this year I wrote some of my thoughts critiquing the formal principle of the Reformation, Sola Scriptura, focusing on the Doctrine of the Right of Private Judgement as an essential constituent of it. I’d like to do a few things with this. First, I’d like to extend my thinking a bit more and respond to a few critics. Second, I’d like to examine some of the historical sources for the doctrine.

Comments are open but moderated. I kept them closed for the reasons I stated previously. And you can email me at the listed email and I will try to get back to you as time permits.